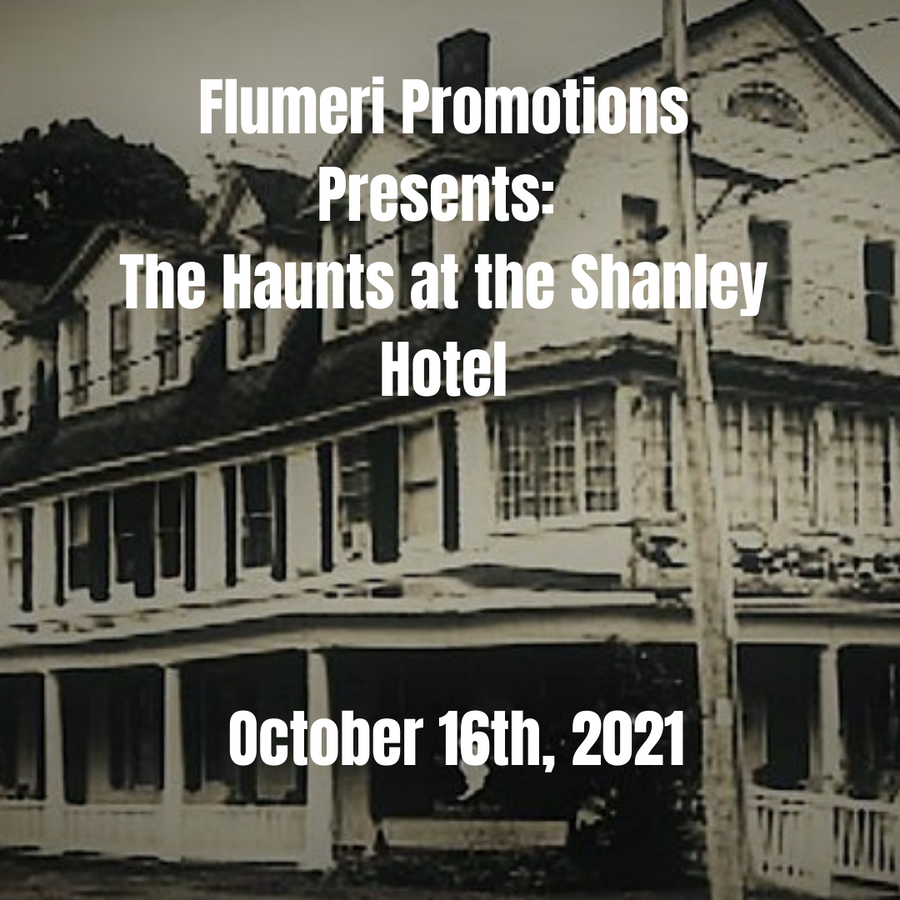 This event is NOT SOLD OUT - Please click the link below to purchase tickets!
FLUMERI PROMOTIONS PRESENTS: The Haunts at The Shanley Hotel Tickets, Sat, Oct 16, 2021 at 7:00 PM | Eventbrite
Come and investigate The Shanley Hotel with Daryl Marston from Ghost Hunters!

In 1845, Thomas Ritch erected the Ritch's Hotel on Main St. in Napanoch, NY for those who wanted to escape the city life. Due to the convenience of the nearby railroad, may travelers frequented the hotel. In 1851, Ritch sold the hotel where it became known as the Hungerford's Hotel. Mr. Hungerford catered to the same clientele as Mr. Ritch, including the elite Gentleman’s Club that boasted a very distinguished membership and was quick to dandle the ladies of the bordello on their knees. The hotel changed hands a few times but in 1887, Adolph Wagner became the new landlord. Eight years later, on March 18, 1895, a nearby home in Napanoch caught fire. The fire quickly spread leaving ruin in its wake. The Shanley Hotel was not spared the damage and was tragically burned to the ground. Mr. Wagner would not see his investment go to waste so he quickly rebuilt and the hotel was back in business by November of the same year. The most notable owner and for whom the hotel is still named was James Shanley. When his family immigrated to New York City from Ireland, James and his brothers found success in opening restaurants and hotels across the country. He moved upstate and discovered the beauty of the hotel and the town of Napanoch. He purchased the hotel for his own on October 1, 1906. Mr. Shanley gave it his own touch by adding a bowling alley, billiard room and even a barber shop to the building. James success brought prestige to the community but it wasn’t simply his ability to produce revenue that made the people of Napanoch love him. He was a good man with a kind heart and an outgoing personality; people naturally were drawn to him, including the lovely Beatrice Rowley. The two were married at the Shanley Hotel on April 26, 1910 and took off to the Nation’s Capitol to enjoy their honeymoon. When the newlyweds returned from Washington D.C., they were met by a parade welcoming them home. It was a grand celebration that night that would signal a grand future for the young couple, that is, until tragedy after tragedy befell the family. Unfortunately, tragedy struck the couple. Beatrice loved children and dreamed of having a large family with her beloved James. On January 6, 1912, she gave birth to their first daughter, Kathleen. The poor soul only lived a little shy of six months. She would go on to give birth to two more children, James Shanley, Jr who lived four and a half months and William Shanley who died at a little over nine months. Her broken heart can still be felt within the walls of the Haunted Shanley Hotel. There is more to the story that is the Shanley Hotel that you will get to hear about that night. Your guest investigator for the night is none other than Daryl Marston from the television show Ghost Hunters! Daryl is a seasoned paranormal investigator and is the co-owner of Paranormal Warehouse. One of the biggest paranormal websites around and the lead investigator the You Tube series Epic Haunts!

Hotel Room at the Shanley!

On Your Own Ghost Hunt!

TO EVENT FOR CHECK IN.